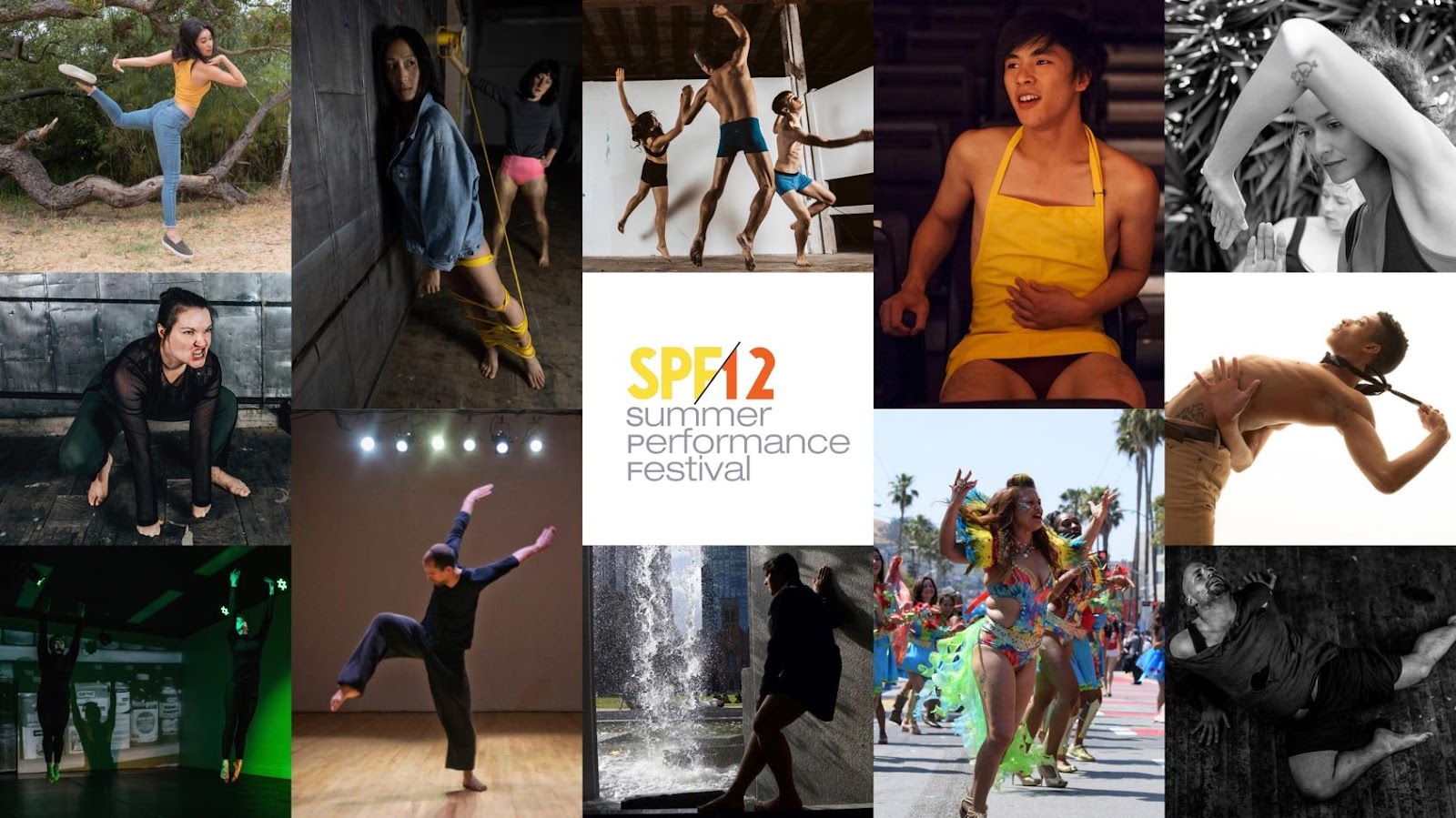 SAFEhouse Arts Summer Performance Festival is an annual event featuring a range of the Bay Area’s dancers/dance makers, from mid-career artists to those just finding their voice. The festival acts as a cultural lab for new movement, experimental ideas and different modes of theatricality, which results is some of the most avant-garde performance in San Francisco. Artists are invited to freely investigate themes both personal and political, from the lyrical to visceral. 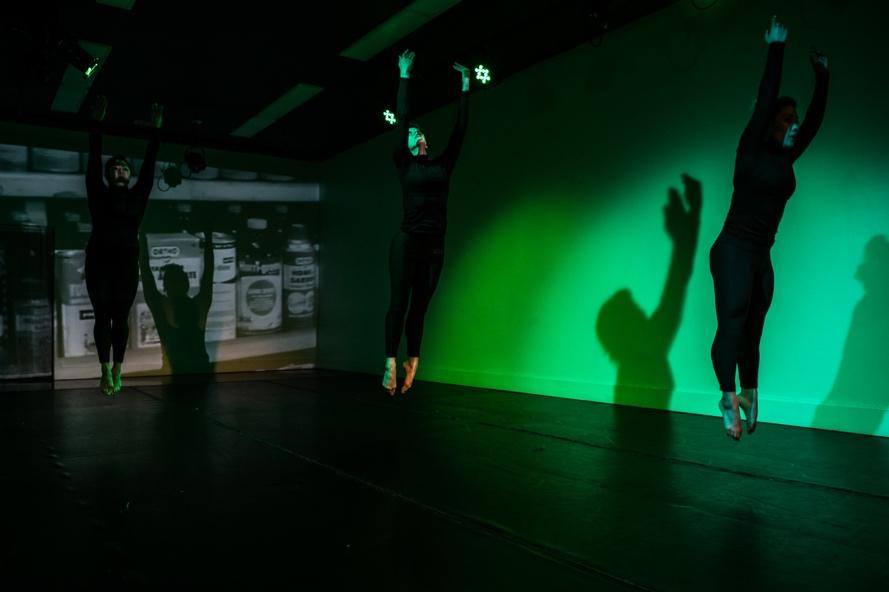 Cinthia "Kitty Conlon" McManus (MA) is an Ecuadorian-American dance professional with a background in classical ballet, science, and visual art. Kitty has presented work in the Bay Area, Southern Oregon, New York City, and Davis, California. She is currently a Lead Artist at SAFEhouse Arts and on faculty at Xian Yun Academy and Studio 505. Kitty is joined by Ricky Berger (a LA based singer/songwriter/multi-instrumentalist) and Jessica Lawrence of Queer Ballet Collective. 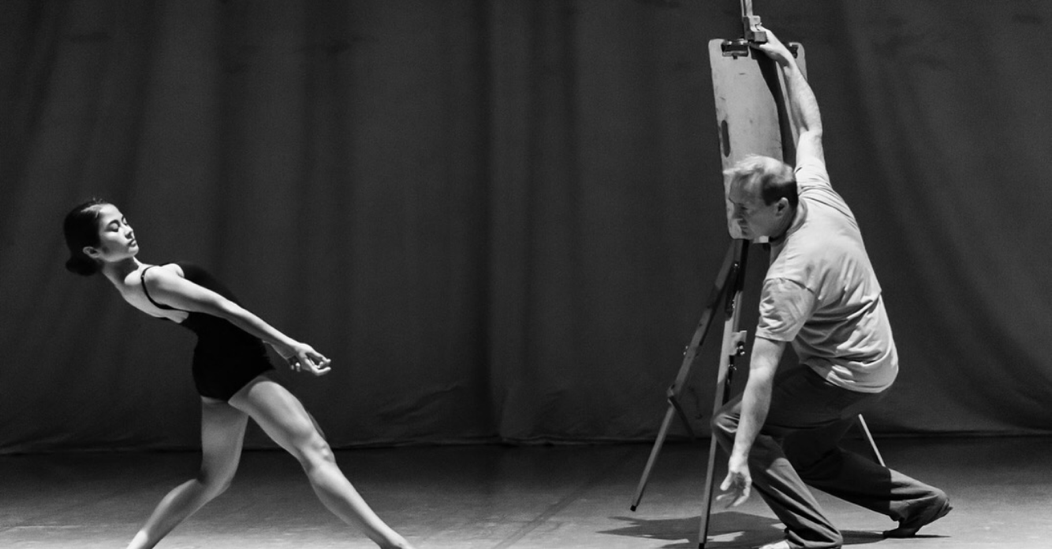 Founded and Directed by Mariana Sobral, eMotion Arts is a Bay Area-based Dance Company with the mission of spreading a message of Oneness through Dance. Embracing diversity by incorporating different dance styles and artistic visions, the company utilizes an ethereal movement that eases the audience in reflecting on current events and how they shape us as individuals and a community.

The Act of Dreamer explores immigration and how the act of moving to a different culture transforms the individual through the influence of the society and its political/socio-economic climate. Choreographed by Mariana Sobral (an immigrant herself), this piece is a collaboration with Bay Area composer Peter Colclasure, who's score based on Emma Lazarus’s sonnet ”The New Colossus”.

Ubi reflects on how acceptance, compassion, isolation, and connection have affected/shaped our society. Photo: Courtesy of Mariana Sobral 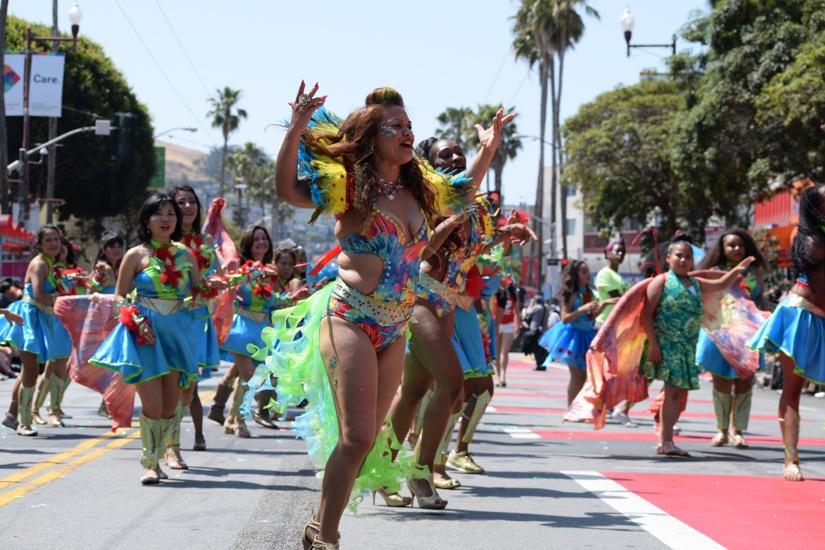 United Rhythms of San Francisco is directed/produced by Brenda Perdue and is an all-inclusive dance fitness company specializing in World Rhythms. The ensemble thrives with collaborative ties to the community giving dancers the opportunity to reconnect, strengthen, inspire and pay homage to their indigenous roots. United Rhythms working towards its 5th anniversary in 2020. 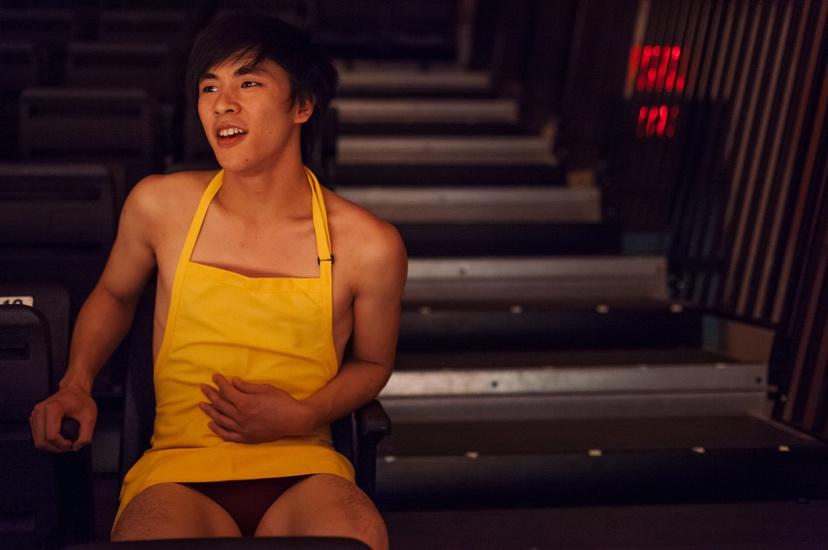 Kevin Wong has been dancing for sixteen-years in Chinese Folk with the Flying Angels Chinese Dance Company. He gained his BA from UC Riverside while directing Collective Faction Hip Hop Dance Company and performing with the Gluck Contemporary Dance Ensemble. His artistic dance practice is based around experimenting by asking questions, reflecting on different approaches, and offering time and space for others to explore.

Wong is currently investigating the struggle of communicating heartbreak and allowing emotional responses (like anxiety, depression) to come out through movement.

Bahiya Movement was founded in 2011 by mother and daughter, Afia and Nafi Thompson. Bahiya Movement has resented work at Oakland Art & Soul Festival, Black Choreographers Festival, San Francisco Carnaval, The Palace of Fine Arts, and Denmark Arts Center in Denmark, Maine. Bahiya Movement’s mission is to heal through the art of movement. The company will premiere original work in a solo program. Photo: Courtesy of Bahiya Movement 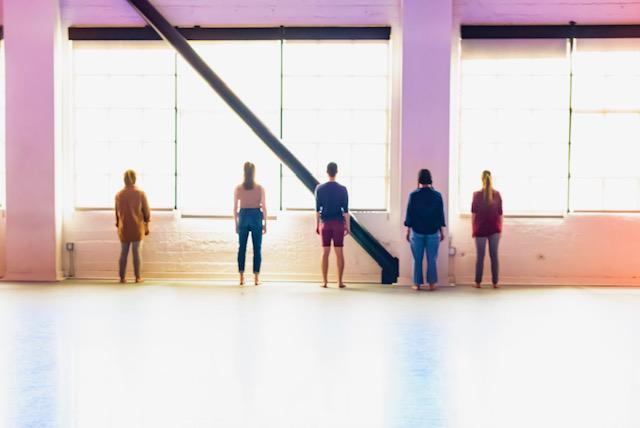 Jenna Valez is artistic director of PULP, which creates dances that strive to find our strangeness, uncover the realities of our unconscious, and build community. Jenna is a female dance artist who resides in San Francisco, CA. who is currently working and performing with Rhea Speits, Molly Fletcher-Lynch, Chelsea Van Billiard and CatCallChoir. She also has had the pleasure to dance with Quicksilver Dance Company, Dog+Pony, Christine Cali, Scott Wells, and Maligrad Dance Company from which she has performed nationally and internationally. 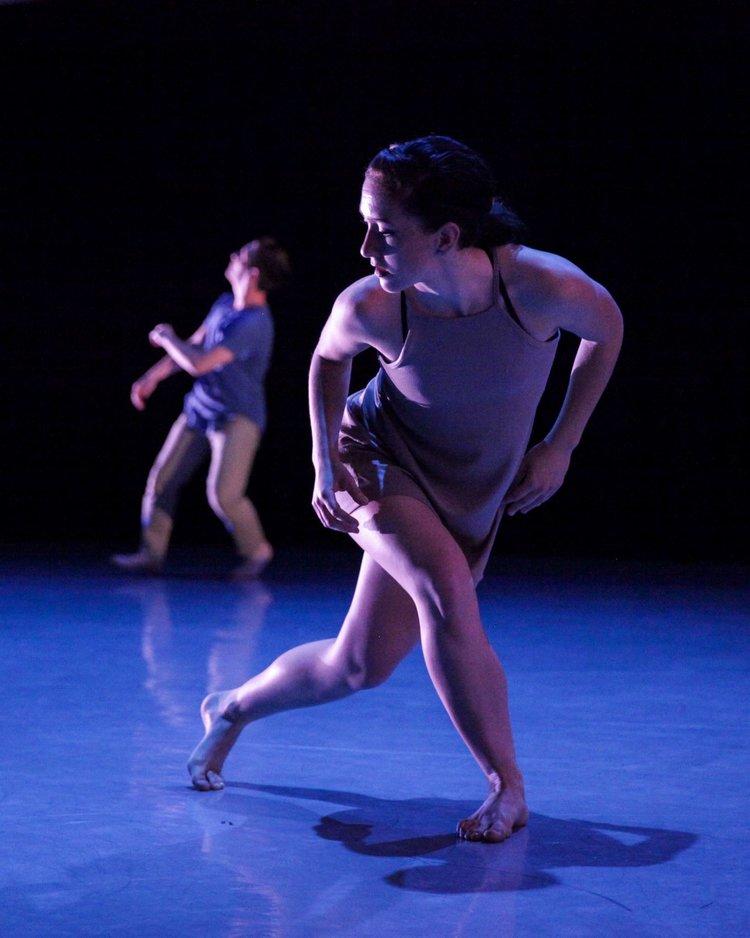 Peri Trono’s vision is to create works that exemplify the vulnerability of the human condition, often by drawing from gestural movements and the architecture of the human body. Her work is elevated through her collaborative process and informed by her training in ballet and modern techniques. Trono received her BFA in Dance Performance and Choreography from the UC Irvine. Photo: Courtesy of Peri Trono 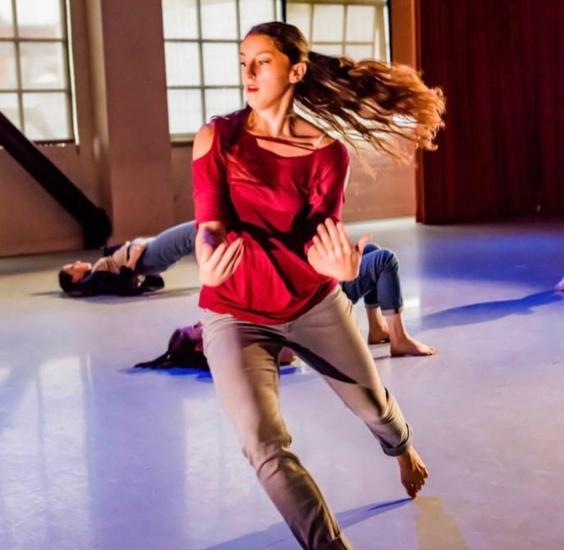 Chelsea Van Billiard is a Las Vegas native who has performed nationally/internationally for Maligrad Contemporary Dance Company under Molly Fletcher and continues to create work in the Bay Area while performing in projects with Sarah Keeney, Rhea Speights, and other local choreographers. Chelsea holds a BFA in Dance and Theater from the University of Hawai’i at Manoa. She also studied at the London Contemporary Dance School, with additional training via workshops and intensives in Berlin, Israel, and SF. Photo: Kyle Adler 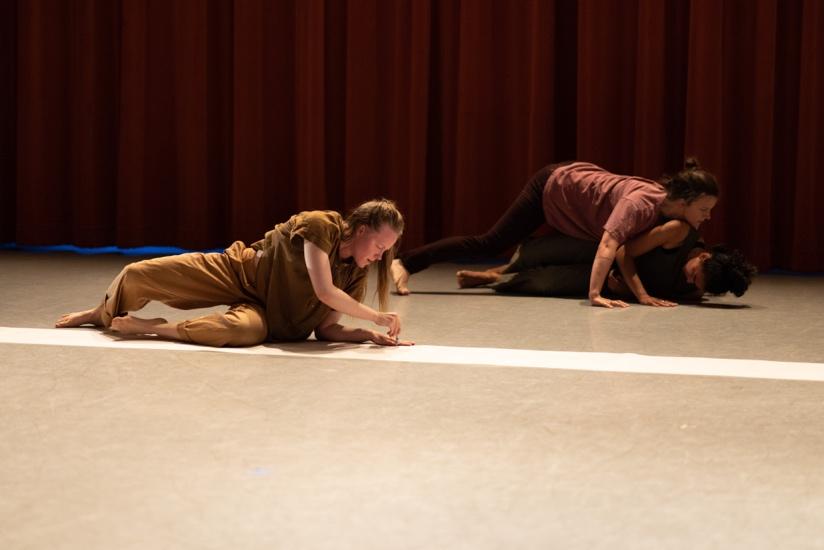 Emma Lanier and Ky Frances co-direct, Kickbal. They started making work together in 2014, and serve as a resource for each other when working apart. Separately, they have lived and danced in Spain, Chile, Mexico, and in the USA. They have presented their work nationally at Pulitzer Arts Foundation in St. Louis, MO, David Zwirner Gallery in New York, NY, and locally at BAMPFA, Works in the Works, LevySalon, Studio 210, Spruce Street Co-op, 63 Bluxome Street, and Dance Lovers 8.

They are currently choreographers in residence at RoundAntennae under the mentorship of KT Nelson. Emma dances with Rachael Cleveland’s ReadyMaids in Oakland and Ky with Molly Rose-Williams and co. Photo: Mark Shigenaga 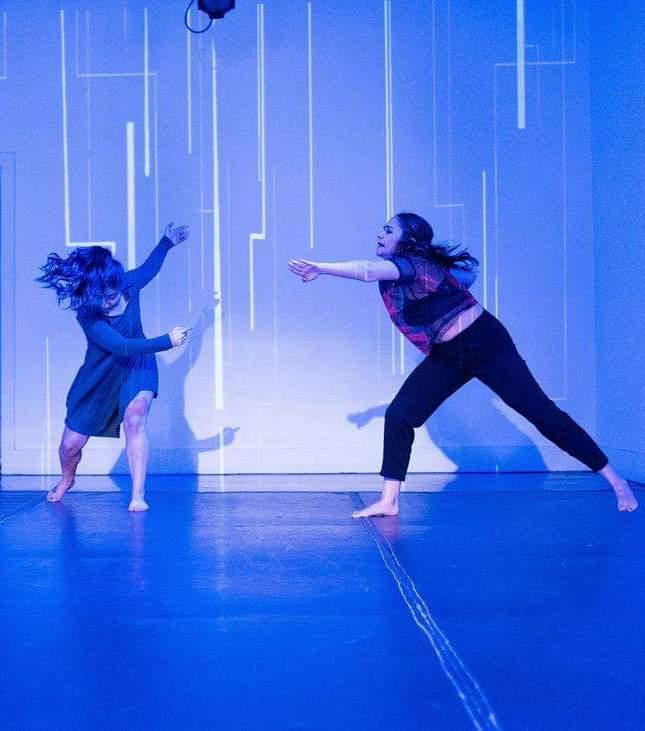 Emergence Dance Company envisions how movement can be a positive force throughout the peaks and valleys of the life cycle. We take a humanistic approach to movement and the artistic process through our commitment to technique, experiential awareness, and ritual practice. Photo: The Studio CV

EbbFlow collective creates work inspired by the life/art process of Anna Halprin and uses a variety of media to generate choreographic material that is relevant and symbolic of various themes that arise during the process. Photo: Marina Reichenberger de Oliveira 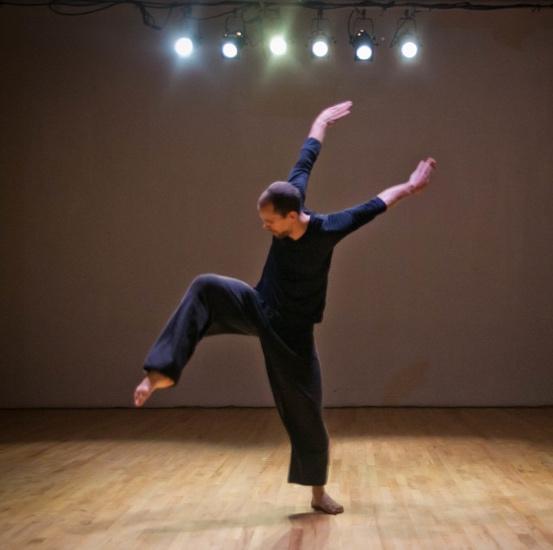 TALLI JACKSON(Not performing due to injury)

Talli Jackson was born and raised in Liberty, NY. He was a member of the Bill T. Jones/Arnie Zane Company from 2009-2017. Additionally, Jackson has worked as a freelance artist with The Francesca Harper Project, Paul Matteson, Erick Montes, Joseph Poulson, and The Vanaver Caravan. In 2013, he was honored with a Princess Grace Award in dance. Jackson will present new work in SPF12.

Truth/project 2 wonders about the glue that holds our minds together. Moving on from a foundation of lush physicality and formal structure, it employs crafty decompositions of time and content to dissolve the weak ties binding a fragmented “reality” into coherence, and seeks ultimate calm in the consistency of an unstable existence. Photo: Whitney Browne

With attention to form and process, Jennifer Perfilio creates work that affirms the meaningful state of our subtle, fragile bodies.  Her current work, oneTwo5four7 explores the intersection of vulnerability and resiliency through pattern, adaptation, and the organization/ re-organization of the body. Photo: Kena Frank Photography 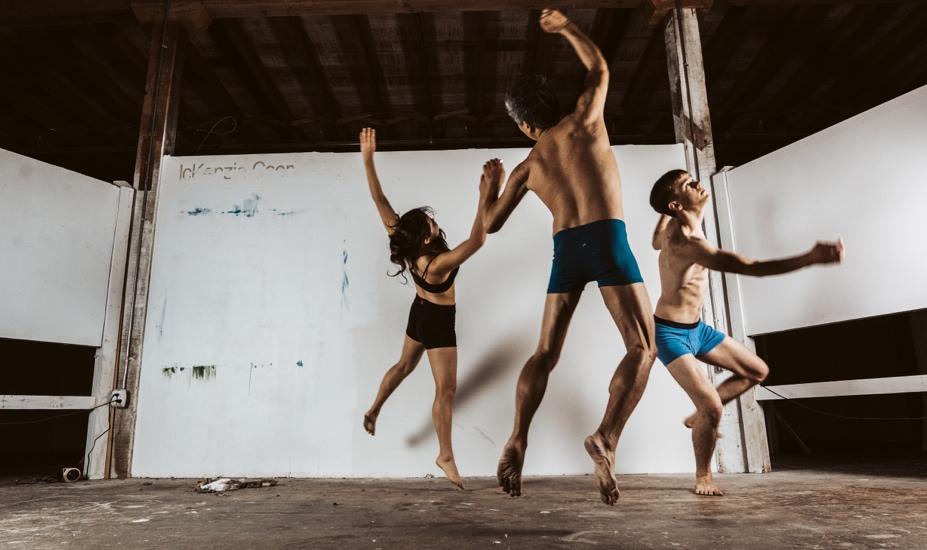 Jesselito Bie moved to the Bay Area in 1992 to dance with the High-Risk Group and has since performed with many local companies such as Scott Wells, Stephen Pelton, Cid Perlman/Nesting Dolls, Kulintang Arts, Erika Shuch Performance Project, Jerome Bel, Krista DeNio/ETS, Joe Landini and Kim Epifano/Epiphany Productions. In 1994, Jesselito assumed leadership of STEAMROLLER Dance Company. He is currently a lead artist at SAFEhouse Arts and co-directs AIRspace, a QTPOC artist residency program. More recently, he was selected to participate in both The Feedback with Joe Goode and the CHIME program with Margaret Jenkins.

STEAMROLLER will present TORCH, an examination of smoking and our cultural assumptions around addiction. Photo: Robbie Sweeny 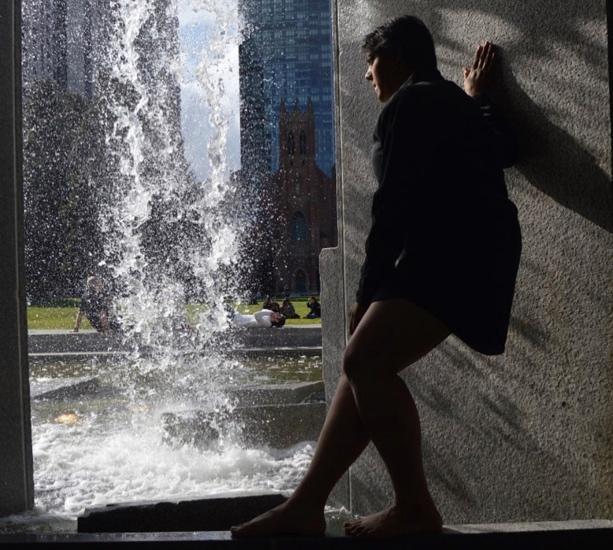 pateldanceworks creates queer, feminist movement art that holds the focus of creating movement at the intersection of embodied philosophy and dynamic sensation taking precedence over stagnant form. Started in 2017 with dancers Bhumi B. Patel and Jordan Wanderer, pateldanceworks presents work in the exploration of pain, grief, body memory, and awareness.

pateldanceworks’s zero is part of the Ionosphere Triptych, preceded by two works, Black Holes (2017) and fellow traveller (2018). This series of works focuses on relationships: between animate humans, inanimate objects, the us and the environment. For this final piece in the triptych, Patel is examining the existence of zero and infinity in the natural world. This work addresses the existential crisis of existence in the socio-political climate that deems curiosity and intelligence dangerous, and creates polar divides between people that can create both a nothingness and an infiniteness, both of which can feel impossible to transverse. Photo: Zackary Forcum 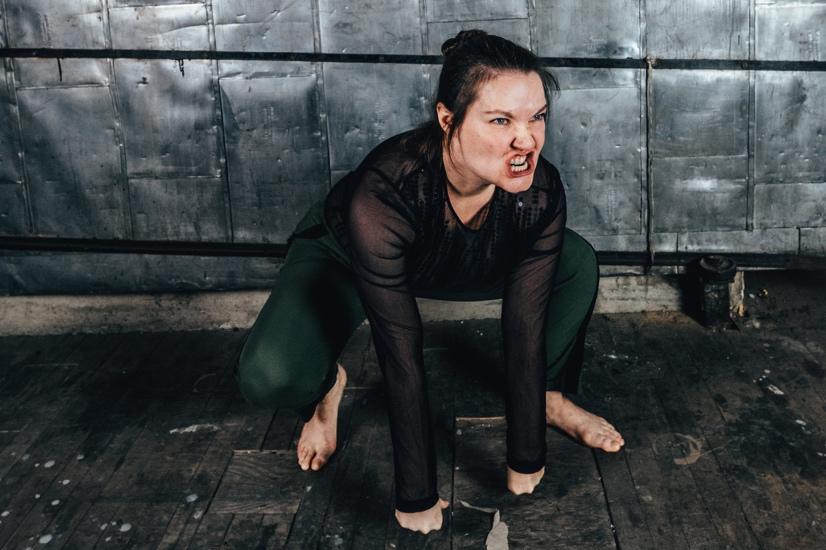 Rhea Speights is an artist and teacher, working primarily in dance and video. Her work has been presented at various venues across the United States and in Colombia and New Zealand. Rhea's creative practice is influenced by her experiences with artists she admires including Jennifer Monson, Jessie Young, Angie Pittman, and Sycamore Toffel. In making her work, Rhea uses ballet and contemporary dance forms, video, cinema theory, and her desire to fully integrate the imagination with the body.

long for breath sources imagery from a collection of feminine personas including Persephone in the Underworld and The High Priestess of Tarot, it doubles down on the mysticism and esotericism that dance and the feminine are accused of practicing, and it excavates interior sensations of being alive to create a performance work that haunts. Photo: Robbie Sweeny 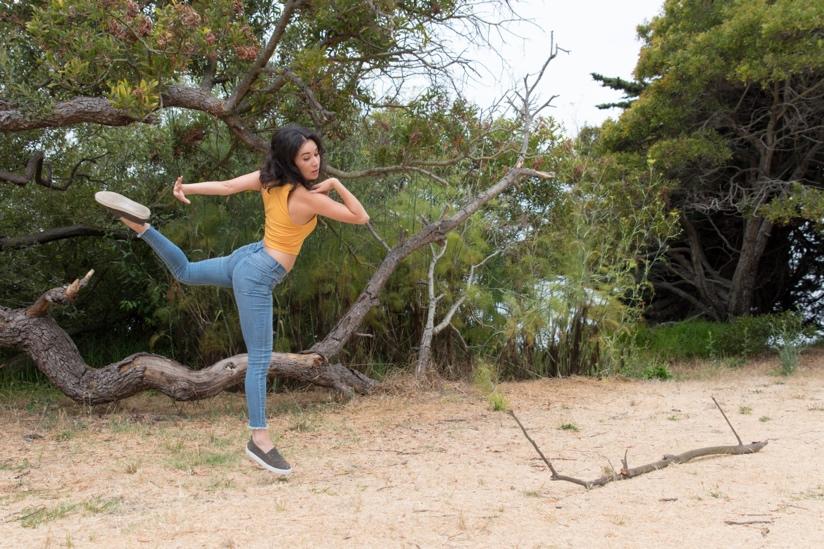 Since 2010, for change dance collective has been creating highly experiential dance theater excavated from raw experience, employing a uniquely democratic approach to art-making that embraces collaboration, shared ownership, and intimacy of all kinds.

fcdc presents Sigh of Relief. We encounter resistance everyday. We take action to push against our physical or mental barriers to try and obtain something--strength, power, acceptance, change, love--but what happens when we stop? What does it feel like when we stop engaging? How does our experience change when we are living in the memory of the action, no longer faced with the sensation of resistance?. Photo: DVB Photography 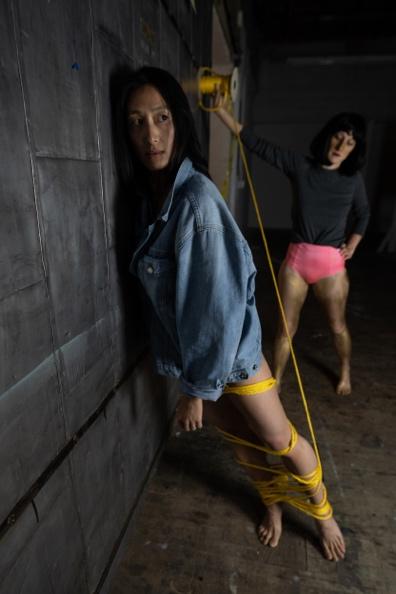 Irene Hsi has been making movement-based performance for more than fifteen years in NYC, New England, and CA. She has worked with include Michelle Boulé, Jill Sigman/thinkdance, Anneke Hansen, Emily Beattie, Ming Wong, and Allyson Green, and the experimental theater company, The Nerve Tank. Irene is currently a 2019 SAFEhouse Lead Resident Artist.

strictly sideflower is a trio of performers investigating perceptions of themselves as East-Asian female-presenting people. It is a combination of improvisational scores and set movement developed through conversations between the performers and other collaborators. This performance is part of the AsWoProject, an ongoing investigation of Asian-American identity and gender through movement practice and art making. Photo: Robbie Sweeny 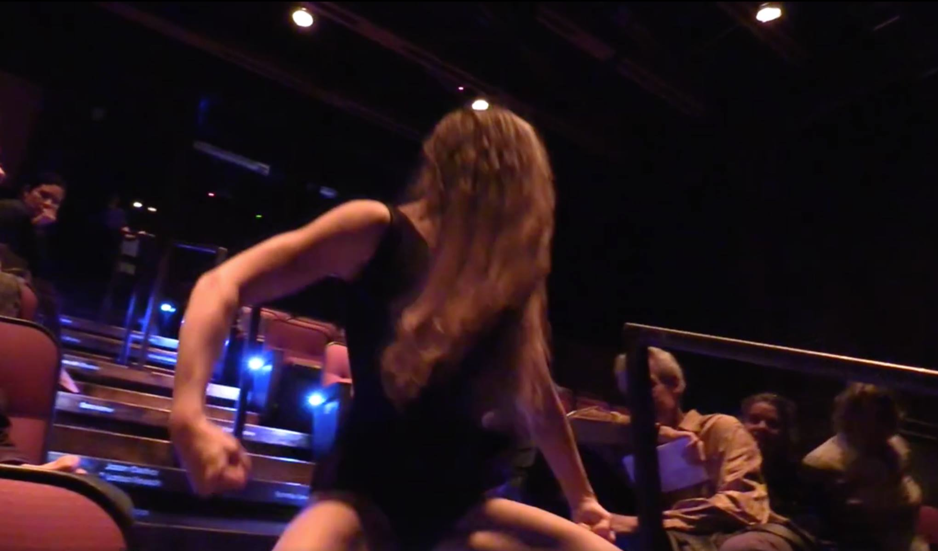 Alma Esperanza Cunningham uses form to explore deeper questions about humanity and femininity. Her work has been presented at Dixon Place, Movement Research at Judson Church, Dance Theater Workshop’s Fresh Tracks. After moving back to SF from New York, she formed her company Alma Esperanza Cunningham Movement (AECM). Alma has been an Artist in Residence at ODC, Jon Sims Center for the Arts, and has partnered with Robert Moses in Margaret Jenkins’s CHIME. Alma was the recipient of a 2004 GOLDIE award. From 2007 to 2012, she focused on personal health and motherhood which reinvigorated her artistic vision and expanded/added depth to her research. Recently Heather Desaulniers of Critical Dance, noted Alma’s work as “hard-hitting, hypnotizing” 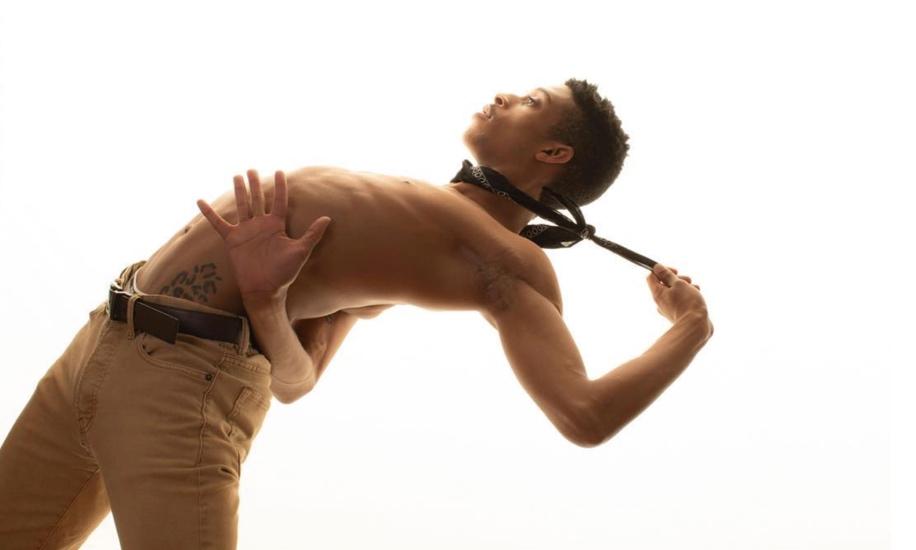 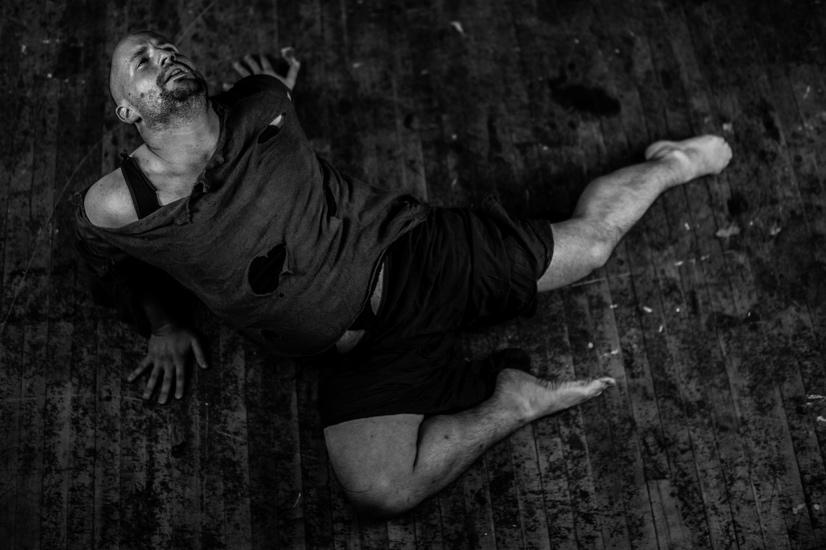 OOMPH Dance Theater is proud to present the first two pieces of Into the Void (a series of episodic works). The Rage in this Cage is a solo dance theater performance that examines rage as a force, the process of becoming, and the nature of choice in survival. This is the End is an ensemble work that explores the coercion of women by the patriarchy into gas-lighting domestic violence victims and the trauma that stems from it. Together these episodes begin to tell a story of resilience. Photo: Robbie Sweeny

Heather Stockton (she/they) is a choreographer, educator, and multi-disciplinary collaborator with a passion for collective, creative growth and systemic change. Heather is the Co-Director and founder of the local dance collective, Wax Poet(s), where she dances between roles as director, choreographer, and performer. Heather is energized by community practices with an intersectional lens. As a proud big bodied dancer, she works towards inclusivity for all bodies and ability in dance.Heather will be presenting their work Thou Swell, an accumulation of movements, feelings, and events.